Molds and Patterns for Thermoforming 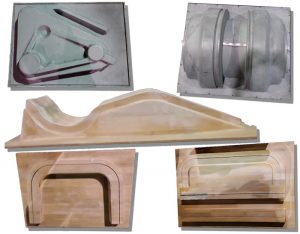 Production molds are generally made of cast aluminum. Molds made of wood or epoxy are also used, but they usually don’t do well in the long haul. They offer poor heat transfer and require much more maintenance than aluminum.

When a part is formed it must be cooled to the sheets set temperature before it can be safely removed from the mold. This prevents part warpage and maintains dimensional stability. Forced air from cooling fans provides part cooling from the outside of the part. The aluminum mold with embedded water lines provide cooling from inside the sheet. The heat from the sheet transfers through the mold and into the water. The temperature of the water is usually set to about the set temperature of the material being formed. Therefore, the mold temperature, sheet temperature, and cycle time of the machine will be consistent throughout the run. Using other mold materials other than aluminum will keep this from happening. Wood and epoxy mold temperatures will keep increasing during the run causing inconsistent cycle times…. and inconsistently formed parts.

Thermoforming is more than just cutting a piece of wood into the shape of the object you want and having a casting made. Several points must be considered. First is the aluminum shrinkage during the casting process. Then there is the material shrinkage during the forming process. Depending on the material it can be from .003″ to .025″ per inch. In other words a mold that is 20″ long can produce a part that is 19.5″ long. Another consideration before building a pattern is the secondary finishing operations. Many times there needs to be locators formed into the sheet, dimples for drilling, add-ons to aid in web control and general ease of forming. These are all determined on a part to part basis. Don’t feel insulted if you build a pattern and you are told it won’t work. The best thing is to leave it to the forming professionals. In the long run it will be cheaper.